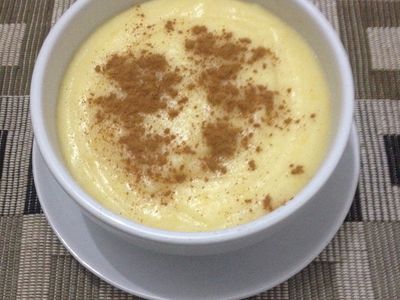 A "mingau de fubá" is a cornmeal-based dish that is somewhat common in Brazil, usually served to children since it is sweet and does not require any teeth. It is easy to prepare and fills up the stomach quite well, which also makes it a good breakfast alternative, specially during cold days. It can also be made using oats instead of cornmeal, in which case it approximates what is known as "porridge" (apparently! I wouldn't know, since I have never eaten porridge).

I love mingau. For me, it invokes a feeling of purity that cannot be found in other dishes -- it is a sweet cream that avoids being too sweet and somehow fills you up quite a lot. It reminds me of my childhood, and of a simpler time in which I did not have any teeth. Mingau is a magical gateway to this teethless past.

It's a pretty simple dish, so it's hard to mess it up. Still, I've managed this feat in the past once before, specifically by adding a tablespoon of salt "just to feel it you know". My advice is: don't do that.

Something that I've started doing recently is breaking up toasty crackers and adding them to the final result. The crackers melt in the mingau and provide what I feel is an interesting texture to the overall dish, which becomes more heterogeneous instead of being just a creamy soup.

I've also experimented with adding a teaspoon of instant coffee to the mix, but I didn't notice any change to the mingau's flavor. The caffeine is still there, however, which some may consider a victory...?